Immigration System, Asylum & Policy A new citizenship referendum around the corner? Attempts to ramp up sympathy.

Staff member
#1
Is the government of Ireland planning a new Irish Citizenship referendum?

Recently there has been a lot of media attention given to children who are in Ireland illegally due to their parents being refused Asylum.

Despite this, the Irish state is so far refusing to comply with the will of the people when it comes to deportation orders. On average 80% of failed Asylum seekers are allowed to remain in Ireland despite having their case for asylum turned down. 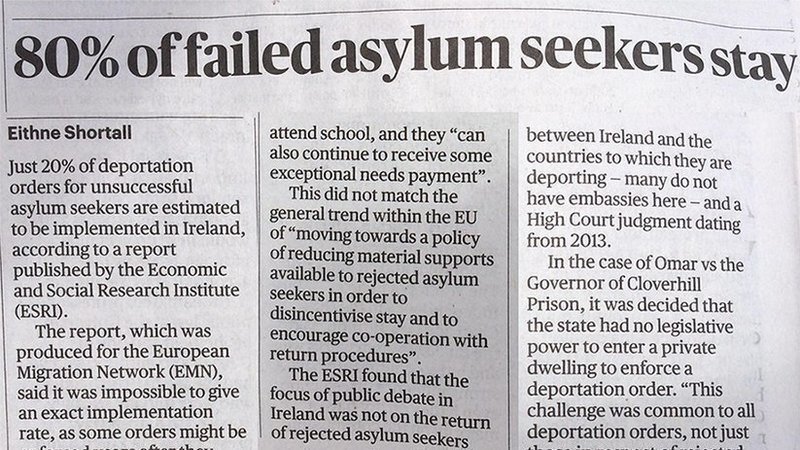 Many elected representatives are now demanding those children who have no legal rights to be in Ireland, allowed to remain.


https://twitter.com/i/web/status/1053221689725763585
https://twitter.com/i/web/status/1053296232171483136
Minister Harris also appears to not understand Irish law and The Twenty-seventh Amendment of the Constitution Act 2004, which amended the Constitution of Ireland to provide that children born on the island of Ireland to parents who were both foreign nationals would no longer have a constitutional right to Irish citizenship.


Rte recently gave us an indication to just how many Anchor Babies (A term associated with those who have children in an attempt to remain in Ireland) are now in Ireland facing deportation.


Followed by a media campaign focussing on criticism on the 2004 referendum and Dublin City University highlighting another campaign begging for the government to allow someone with no rights to be here allowed to remain.

https://twitter.com/i/web/status/1052886290797142016
Why it's time for a new approach to Irish citizenship rights
https://www.rte.ie/eile/brainstorm/...r-a-new-approach-to-irish-citizenship-rights/


More than 70% of people think being born in Ireland should mean an automatic right to citizenship
https://www.thejournal.ie/irish-citizenship-2-4345852-Nov2018/

Brian Killoran from the Immigrant Council told East Coast FM that legislating for birth-right citizenship would not be un-constitutional despite the result of 2004 referendum on the 27th Amendment. 79% of the Irish public voted to prevent children born on the island of Ireland to parents who were both foreign nationals having a constitutional right to Irish citizenship.

The Labour party is currently proposing legislation in the Seanad that would grant birth-right citizenship to children born in Ireland to foreign parents, regardless of the 2004 referendum result. The bill has passed the second stage. See more here


Everything seems to be supporting a new referendum, and the government look to be warming people up for one, failing that they look as if they may even ignore the will of the people from the 2004 referendum and the constitution of Ireland.

The government is opposing a change to the law that would see children born in Ireland to foreign parents made eligible for citizenship if they’ve been resident here for three years.