Staff member
#1
A new video by the Irish Government launched to tackle Sexual Harassment and Violence strangle lacks any person of colour or other ethnic backgrounds. In what is a bizarre turn of events it seems that on this occasion the Irish Government did not feel the need to include a more diverse or multicultural inclusion when showing victims or the attackers.

Normally when the Irish government push something upon the population they do often include people of various ethnic backgrounds, however on this occasion that inclusion is oddly excluded.

The campaign, entitled 'No Excuses', will run for three years to 2021.


The campaign will operate across TV, radio, outdoor, social and digital advertising.

The Minister said research has shown that Ireland has "disturbingly high levels" of sexual harassment and sexual violence.

The Republic’s crime rate has increased significantly over the last year, with all crime rising expect homicides.

The number of homicides - which include all unlawful killings - decreased by 22 per cent in 2017. There were 71 homicides during the year, compared to 91 in 2016.

However, in what will be a very worrying trend for Government, crime rates have now surged quite significantly for many other types of offences. 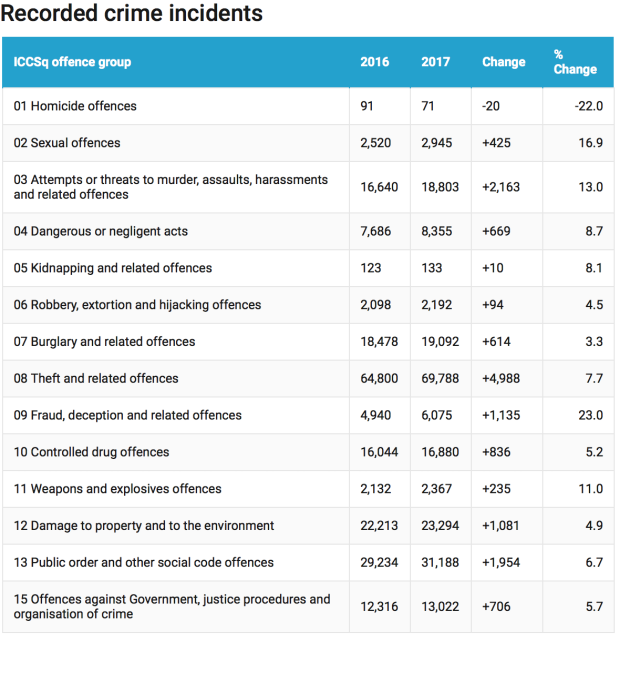 Staff member
#5
Sex crimes in Ireland: Why are they rising to record levels each year?
Cultural and societal changes seen as encouraging more victims to come forward

The number of sexual offences being reported to the Garda is very much on the rise at a time when many crime types have posted modest increases and others, such as burglary, are close to an all-time low.

Last year saw the number of sex crimes reported reach a record level. And the scenario was the same in 2017 and in 2016; a level of sexual offences was recorded in each of those years that Ireland had never seen before.

Staff member
#6
Number of recorded rapes leaped nearly 30% last year amid spike in sexual offences
Rape Crisis Network Ireland said the figures are only the “tip of the iceberg”.

THE NUMBER OF rapes reported to the gardaí jumped 28% last year amid an increase in the number of sexual offences and a rise in practically all types of crime.

According to 2017 crime data, released by the Central Statistics Office today, there were 655 instances of rape recorded by the gardaí last year.

That figure represents an increase in 144 rapes when compared to 2016 and it is part of a wider rise in sexual offences, which increased by nearly 17%.

Rape Crisis Network Ireland labelled the jump in figures “shocking” before calling on the government to ensure that reliable data on sexual violence is available.

“These crime statistics only represent those who report and are therefore the tip of the iceberg,” Clíona Saidléar, RCNI Executive Director, said.

Staff member
#7
Whilst there is no direct mention of the reasons behind the rise in Crime and specifically sex crimes across Ireland, we need only look across to Europe where reporting is more professionally carried out to see what is fueling this rise that is not just an Irish problem.

Sweden rape: Most convicted attackers foreign-born, says TV
About 58% of men convicted in Sweden of rape and attempted rape over the past five years were born abroad, according to data from Swedish national TV.